The #28 Cummins Diesel Special shocked the racing world in 1952 when it captured the pole position at the Indianapolis 500 (Indy 500) with the fastest lap time in history. This feat, along with the car’s many other innovations, won it a prominent place in racing history.

Sixty five years later, #28 was invited to the Goodwood Festival of Speed in the United Kingdom to participate in the legendary Goodwood Hillclimb along with hundreds of modern and heritage cars. While preparing #28, the Cummins engineers discovered that the water pump was so corroded it would probably not survive the event. If the #28 car was to make it to Goodwood in working order, it needed a new water pump.

The original water pump was a unique design specific to the #28 car, which meant no spare production parts would fit the bill. To complicate matters further, they had to ship #28 within a matter of weeks, which ruled out traditional sand-casting methods as infeasible for a replacement part given an estimated lead time of 10 weeks. Instead, Cummins engineers turned to reverse engineering and metal additive manufacturing, combining Oqton’s Geomagic Control X and Design X software with the ProX DMP 320 metal 3D printer from 3D Systems, with help from 3rd Dimension Industrial 3D Printing, a high-quality production metal manufacturer specializing in 3D direct metal printing (DMP). The new water pump was 3D printed in only three days and the entire process took five weeks instead of 10. 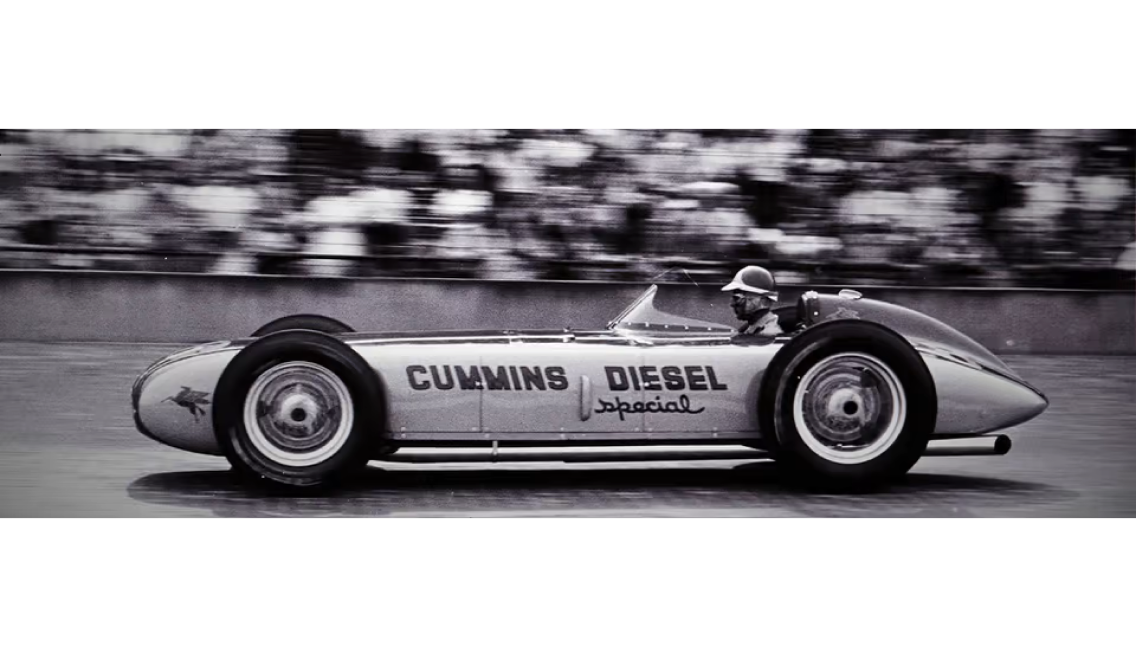 A Page Out of Racing History

#28 was the first Indy 500 car equipped with a turbocharger and the first whose aerodynamics were optimized in a wind tunnel. It ran its four qualifying laps at a record-breaking average speed of 138.010 mph.

Since its momentous run in 1952, #28 has been displayed at the Indianapolis Motor Speedway Museum and the Cummins corporate office building. In 1969, #28 ran a lap around the Indy track prior to the start of the race to mark the Cummins 50th anniversary celebration. The last time #28 ran was at the Goodwood Festival of Speed in the late 1990s.

“As we prepared the car to run again for the first time in almost 20 years, we noticed severe pitting and corrosion on the water pump,” said Greg Haines, design and development leader for the X15 engine and member of the Cummins history and restoration team. “In a few places, the housing was pitted all the way through and was only kept from leaking by mineral deposits that covered the holes. We needed a new housing quickly if we were to meet our commitment to run the car at Goodwood.” 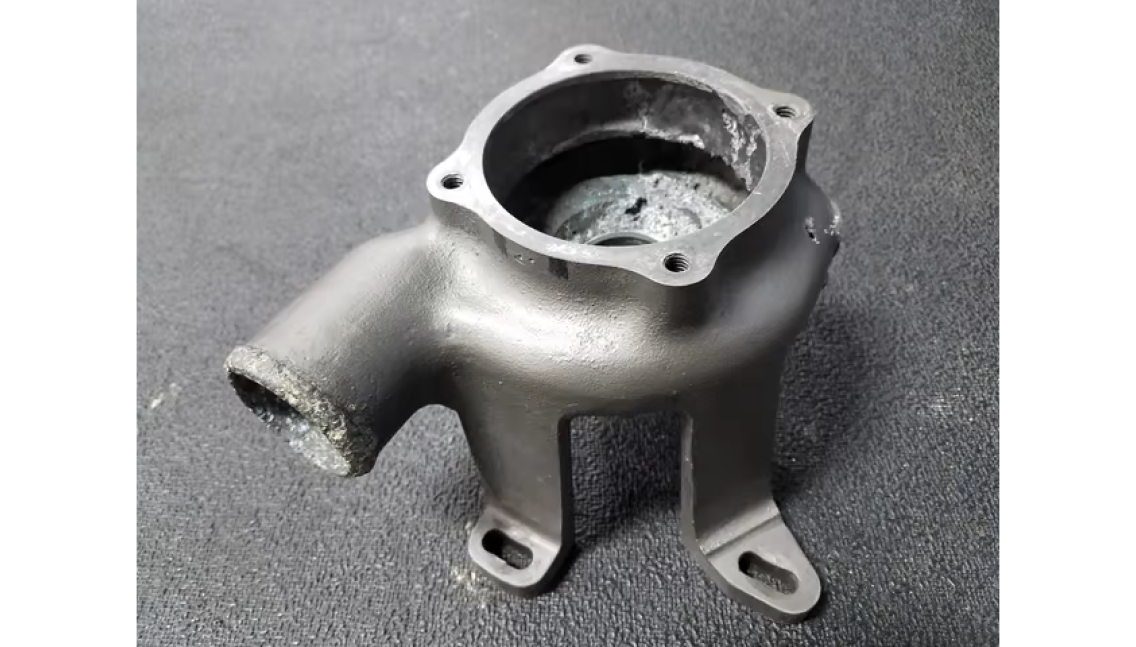 Cummins engineers began by scanning the existing water pump housing with a CT scanner. They selected a CT scanner because the pump contained many undercuts and other internal geometries that would have been impossible to capture with a laser scanner or other line-of-sight imaging tool.

To verify that the scan data was accurate before moving forward, the engineers imported the point cloud data generated by the CT scanner into Oqton’s Geomagic Control X inspection and metrology software where they separated and aligned the internal and external geometry of the pump.

“For a project like this, we typically separate out the internal volute geometry from the body so we can model it as a core and do a comparison back to the point cloud data to be sure all our work is accurate,” said Chris George, master CAD model team leader for advanced system design for Cummins. 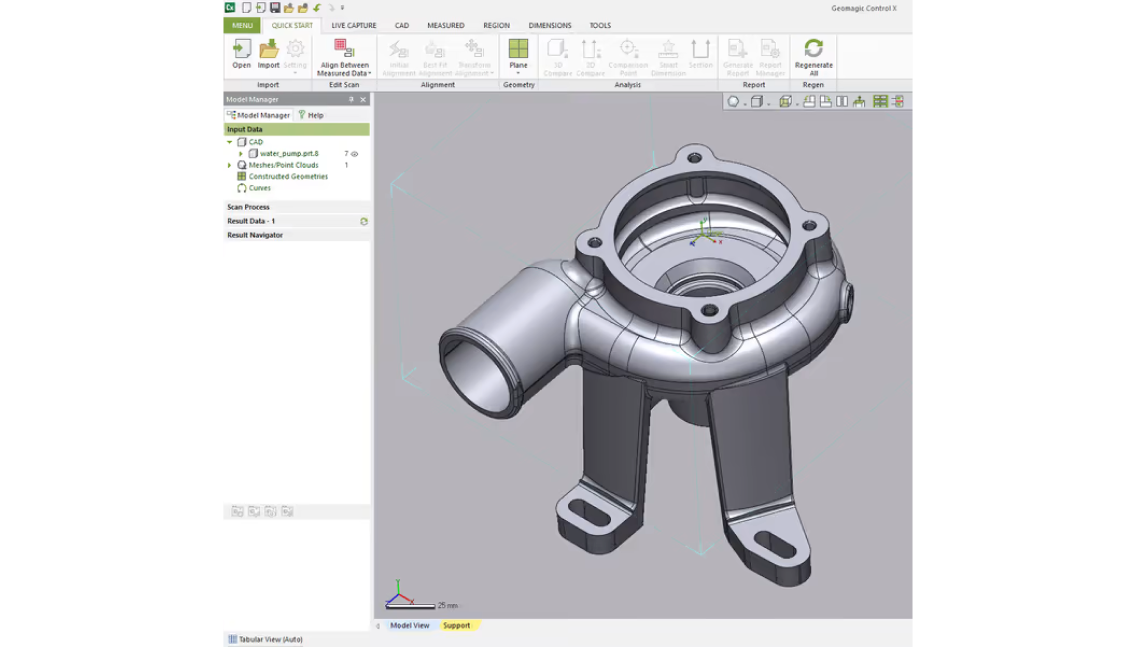 Oqton’s Geomagic software provides a complete solution for processing and inspecting scan data and converting it to a solid model.

With good scan geometry to jump-start its design work, Cummins used Oqton’s Geomagic Design X reverse engineering software to convert the point cloud to a nonparametric solid model to perform CAD fit checks. These checks helped the Cummins team determine the right assembly dimensions for the impeller and shaft and how everything would ultimately fit and seal together.

According to George, Cummins uses Geomagic Control X and Geomagic Design X as its primary software for point cloud manipulation. “Oqton’s Geomagic software provides a complete solution for processing and inspecting scan data and converting it to a solid model,” he says. “We use them for every reverse engineering project we do, which often requires geometric reconciliations, finite element analyses of structure and flow, and model-to-scan comparisons reported to our engineering customers.” 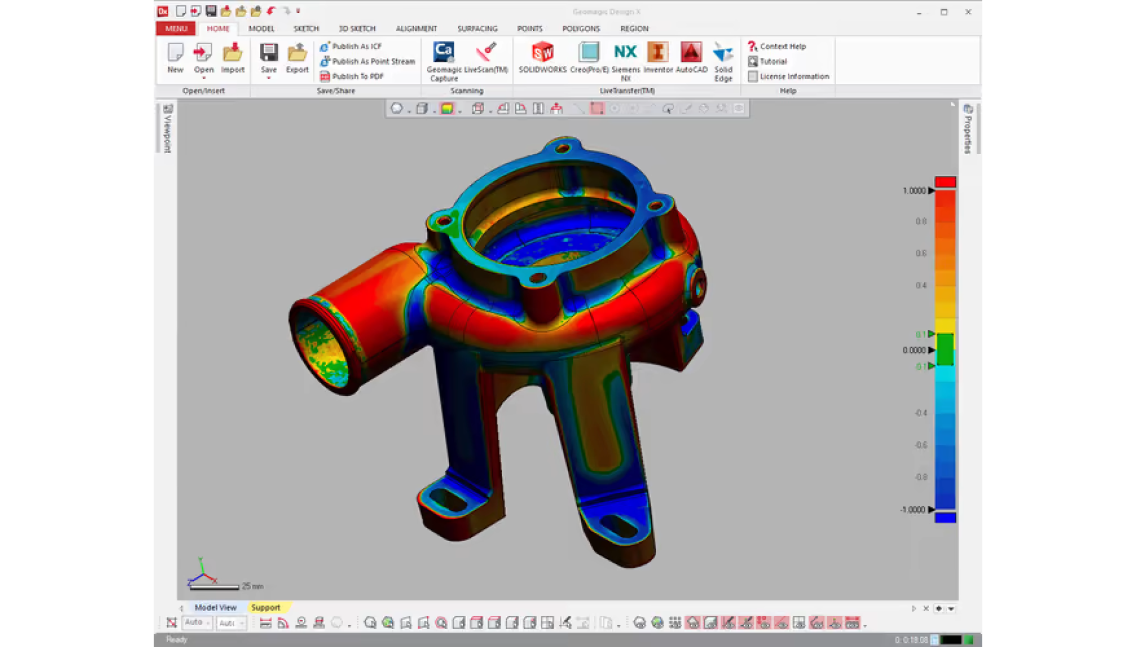 Due to the significant corrosion of the original part, Cummins could not use the model created from the scanned data as the basis for 3D printing. Instead, Cummins engineers imported the nonparametric model into PTC Creo® 3D CAD software to act as a template for creating a parametric model. In light of the physical damage to the scanned pump, the Cummins team had to make informed decisions as they 3D modeled the replacement to achieve a functional final model. 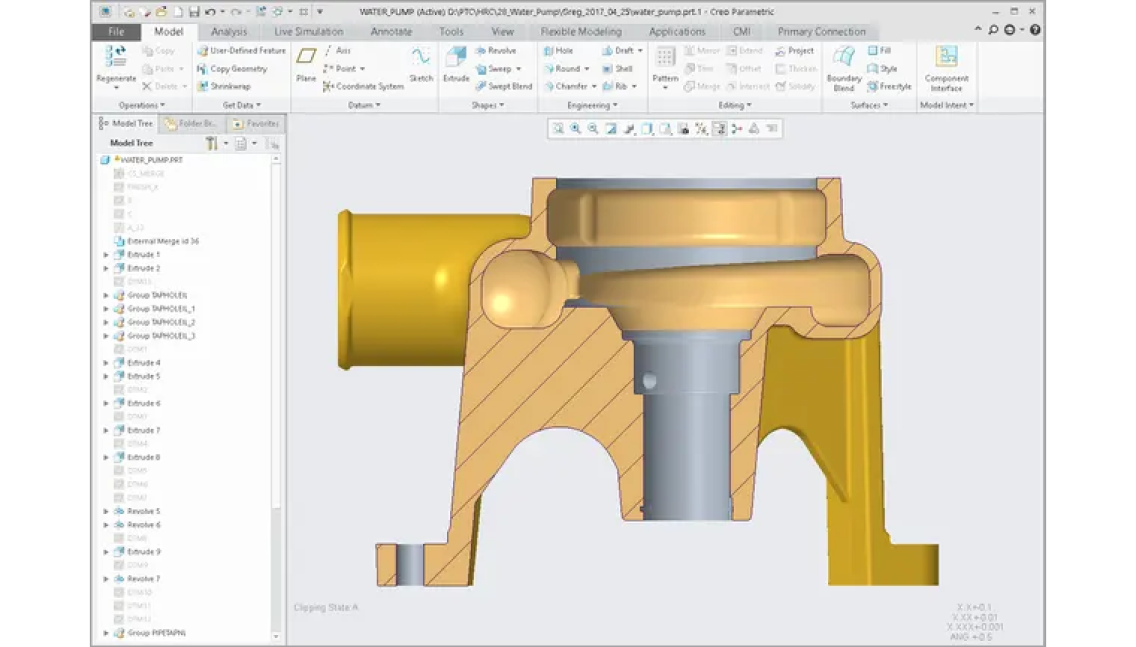 They then sent this file to the team at 3rd Dimension, who cleaned it up, analyzed it for optimal print orientation, and assigned supports for stable printing. 3rd Dimension engineers further sliced and hatched the part to define the movement of the laser during the build.

Although the original water pump housing had been made of magnesium to help reduce weight, magnesium’s susceptibility to corrosion following extended water and coolant exposure was a large factor in the problem Cummins was trying to solve. Therefore, 3rd Dimension manufactured the final 3D-printed part using LaserForm 316-L stainless steel material on a ProX DMP 320 metal 3D printer. 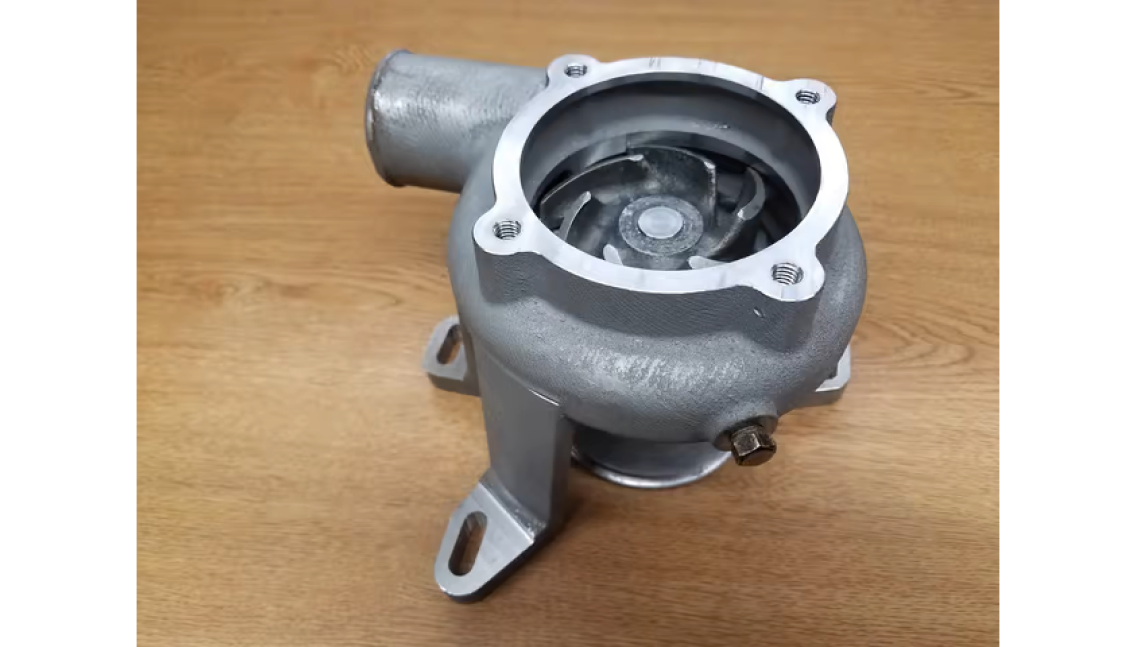 The housing mated perfectly with the other pump components and provided like-new performance for over six Goodwood Hillclimb runs. Just as it had at Indy, #28 thrilled the fans at Goodwood and was featured in“The 10 Best Things We Saw at the 2017 Goodwood Festival of Speed”by Car and Driver magazine. 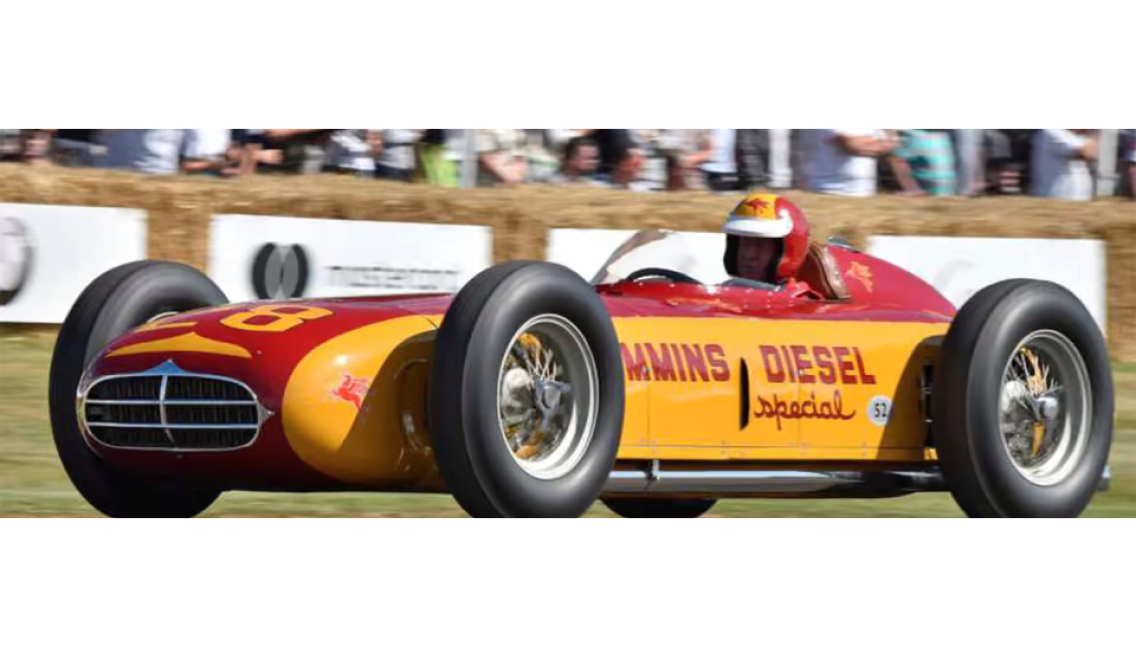 #28 Cummins Diesel Special at the 2017 Goodwood Festival of Speed.