Since Bernard Van Hool first made his first bespoke coach in 1947, the company Van Hool has always been at the cutting edge of manufacturing innovation.

His motto “Building is my life. To keep on building is your task. The road is ahead.” is still followed in the business today. Van Hool now manufactures buses, tour buses, and industrial vehicles, across two production sites: Koningshooikt in Belgium, and Skopje, North Macedonia. Employing close to 4,000 people, the quest is to stay at the forefront of industrial vehicle manufacturing.

When Van Hool teamed up with Oqton, the initial goal was to increase the throughput of its 20 welding robots and reduce the complexity of programming. 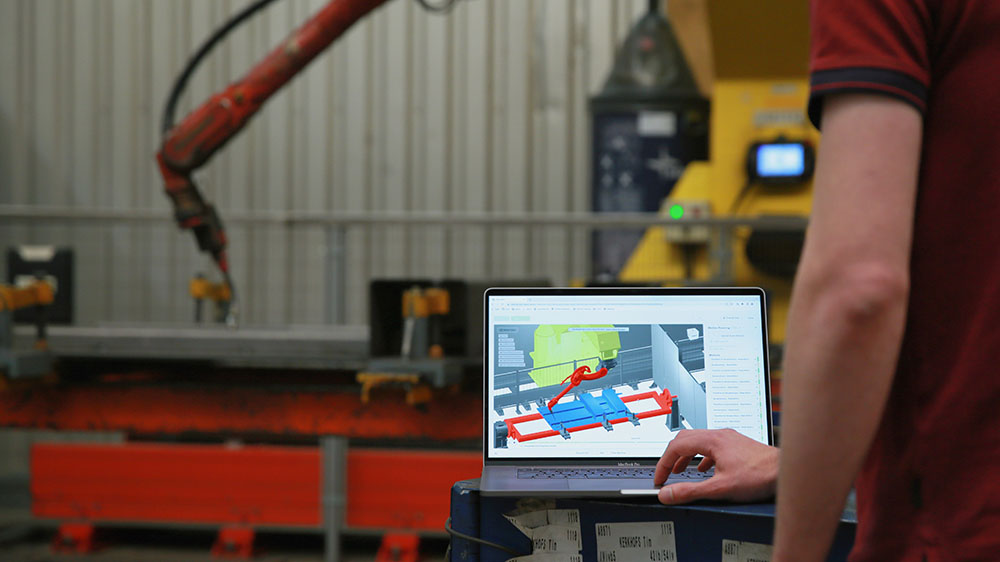 Being flexible to meet client demands

Stefan Dhont, Vice Director, Van Hool Industrial Vehicles, explains in a testimonial video, “Our loyal customers come back to us because we develop and construct trailers and chassis according to their wishes. These wishes evolve over time so we need to be flexible”. Customers require the total cost of ownership to be as low as possible which challenges Van Hool to produce its products efficiently. This is especially challenging as a large part of the industrial vehicle business is highly bespoke. Therefore, Van Hool began looking for an automated solution. Following a lengthy due diligence process, it became clear that Oqton was the best partner on the market.

AI to the rescue

After two years of intensive collaboration, Oqton developed an intelligent manufacturing OS for welding robots that leverages AI to optimal welding parameters. “AI can offer solutions to many future problems”, says Paul Meynen, Van Hool’s IT Architect CAD/CAM. “Oqton brings a solution that is grounded in AI and that fundamentally results in more added value.” With people and skills becoming ever harder to find, and a determination to keep production in Belgium, Van Hool believes that automation is the answer. “We're convinced that Oqton's software will allow us to program more robots with the same number of people as we have today”, explains Meynen.

Deploying robots as efficiently as possible

A team of programmers weld chassis and smaller components to the highest possible specifications, with over 20 robots. The ever-present challenge is to deploy the robots as efficiently as possible, with no downtime lost during programming. Where one operator used to be needed per robot, now a single operator can cover several robots. “With the Oqton software, we only have to determine the type of weld and fine-tune the weld while the software handles robot movements”, explains Pieter Ceulemans, Van Hool’s Robot Welding Engineer.

In the past, time and focus were spent on programming the robot; now, “we can mainly focus on the welding, thanks to Oqton's software”, enthuses Ceulemans. The offline programming of robots means that all the movements, from the start of a weld to the conclusion, can now be taken and perfected virtually, before being passed onto the robot, with no manufacturing downtime. Van Hool now hopes to automate even more steps that are currently being done manually. Automation with Oqton at the helm will provide a solution to the skills, recruitment, and productivity challenges, for many years to come while improving production time by up to 50%.

Founded in 1947, Van Hool is a Belgian family-owned coachbuilder and manufacturer of buses, coaches, trolleybuses, and trailers.